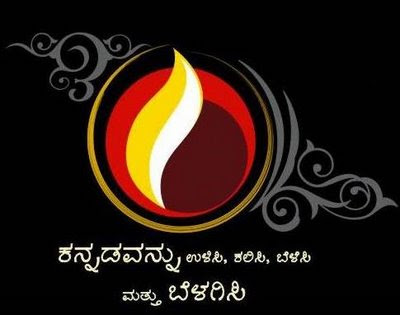 Kannada Rajyotsava (Kannada: ಕನ್ನಡ ರಾಜ್ಯೋತ್ಸವ), or the Karnataka Formation Day (literally "Birth of the Kannada State") is celebrated on 1st November every year. This was the day in 1956 when all the Kannada speaking regions of south India were merged to form the state of Karnataka. On this day in 1956, Mysore state, comprising most of the area of the erstwhile princely state of Mysore, was merged with the Kannada speaking areas of the Bombay and Madras presidencies, as also of the principality of Hyderabad, to create a unified Kannada-speaking sub-national entity. The newly unified state initially retained the name "Mysore", which was that of the erstwhile princely state which formed the core of the new entity.

Celebrating Kannada Rajyotsava On November 1st every year Kannada is one of the major Dravidian languages of India, spoken predominantly in the southern state of Karnataka. It is the 27th most spoken language in the world, with native speakers called Kannadigas. It is one of the Official languages of India and the official and administrative language of the state of Karnataka. Kannada Rajyotsava, or the Karnataka Formation Day (literally "Birth of the Kannada State") is celebrated on 1 November every year. This was the day in 1956 when all the Kannada speaking regions of south India were merged to form the state of Karnataka. November 1, Karnataka will be in a joyous mood. This day is a government holiday. Very few will be out in the streets and community centers chanting Kannada.

Brief History About Kannada Rajyotsava India became a Republic in the year 1950 and in same year linguistic provinces were formed. The state of Mysore is one such state in south India. The state of Mysore was created taking into fold various parts of the region, which were ruled by kings. Several districts in, now called North Karnataka and Hyderabad Karnataka were dissolved in the new state.

The new state was named after Mysore, which by itself was a princely state. People of North and Hyderabad area did not accept the name Mysore. People of this region were demanding a change in the name. After prolonged debate the name of the state was changed to Karnataka on November 1, 1973. Late Devaraj Urs the then Chief Minister of state took this landmark decision. Officially the new state was born on Nov. 1 and on this day every year birthday of the state is celebrated. This is popularly called as Kannada Rajyotsava or Karnataka Rajyotsava. Rajyotsava means "State festival". 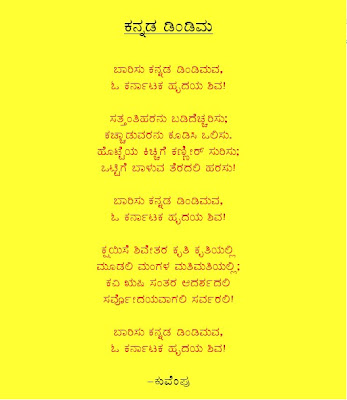 Kannada Dindimava a famous kannada poem written by Rastra Kavi Kuvempu. Let Kannada be spoken by the people of the entire nation. Help Kannada Language Spread through your mediums. Want to know more about Kannada History / History of karnataka Log on to http://www.ourkarnataka.com & http://www.karnataka.com/ The state has been witnessing hue and cries now and then from a section of society. Reason: Deterioration in the number of people using Kannada and dominance of other languages like Tamil, Telugu and Hindi.

May Kannada be the largest spoken language in the WORLD.

At this occasion to not to forget the people who are in trouble with the effect of the flood who have lost their homes, work, money and food. Let's unite and help them by giving them what they and tell them kannadigas do care our kannadigas even in the time of every hurdle.

Popular posts from this blog

May 15, 2020
Color meanings in Designing: Red is for energy, passion, and danger. Orange is for creativity, youth, and enthusiasm. Yellow is for happiness, hope, and spontaneity. Green is for nature, growth, and harmony – but also wealth and stability. Blue is for calm, trust and intelligence. Purple is for luxury, mystery, and spirituality. Black is for power, elegance, and sophistication. White is for purity, innocence, and minimalism. Gray is for professionalism, formality, and conventionality. Brown is for wholesomeness, warmth, and honesty. Pink is for femininity, playfulness, and romance. Multicolor is for fun, diversity, and optimism. Metallics are for wealth, prosperity and success. Courtesy: More insights on Color meanings and the art of using color psychology click here to know more. A shared details with the link to credit. #designing #colorsindesign #designcolors #colorsmeans #whichcolor #red #yellow #green #blue #purple #black #white #gray #brown #pink #mu
Read more

Happy 63rd Independence Day/ स्वतंत्रता दिवस to you & your family FOlks. “ At the stroke of the midnight hour, when the world sleeps, India will awake to life and freedom. A moment comes, which comes but rarely in history, when we step out from the old to the new, when an age ends, and when the soul of a nation, long suppressed, finds utterance..... We end today a period of ill fortune, and India discovers herself again. ” India's Independence Day is celebrated on 15 August to commemorate its independence from British rule and its birth as a sovereign nation on that day in 1947.[1] The day is a national holiday in India. All over the country, flag-hoisting ceremonies are conducted by the local administration in attendance. The main event takes place in New Delhi, where the Prime Minister hoists the national flag at the Red Fort and delivers a nationally televised speech from its ramparts. In his speech, he highlights the achievements of his government during the past y
Read more

Seetharam Y S
Creative Designer by Profession, Humble by nature. Like Writing about anything which comes up to my mind.